Have you ever thought how much is the world’s average country population? And what does it say about the country you are living in or for the quality of life of the average person? All these questions are related to what we call the “Inspection Paradox” which we are going to illustrate here using Python.

First of all we need to find some data. For that purpose we could use wikipedia. We are going to do everything without even opening a web browser! There is a nice Python library we could use to access and parse data from Wikipedia. In order to install it we need to simply run.

Then it is easy to search for an article containing the information we want:

If we check the search results they are the following:

The first search result is usually the most relevant and in our case it is exactly what we want. Then we need to get the wikipedia url for that search result and then get the actual HTML for the page. In order to parse the HTML document and extract the data we want we are going to use another Python package called Beautiful Soup. This is an essential package, which is very useful for web scraping. In order to install it we run again the following:

For an HTML parser we are going to use the default one that is included in Python’s standard library. If we want some extra speed we could also install the lxml parser but for our purposes the standard one is good enough. This is how we create a BeautifulSoup object with the default HTML parser:

If we look in the HTML we can see that the data we are interested in are contained in a wikitable class under the tag name table. So in order to get this table we need to write:

Now just to refresh some HTML the <tr> element defines a row of cells in a table. The row’s cells can then be established using a mix of <td> (data cell) and <th> (header cell) elements. So what we need is to iterate twice, once through the rows and once through the cells of the table. Knowing that let’s print the first three table rows to get a feeling of how the data are organized.

And here is the output of the above code segment.

We could also save them in a Pandas data frame. For that purpose it would be easier to visualize the results by using a comma separating the thousands. We could easily do it with a dict comprehension and then create a Pandas frame.

Here is a figure of the top 20 and bottom 5 countries in the world in terms of their population: 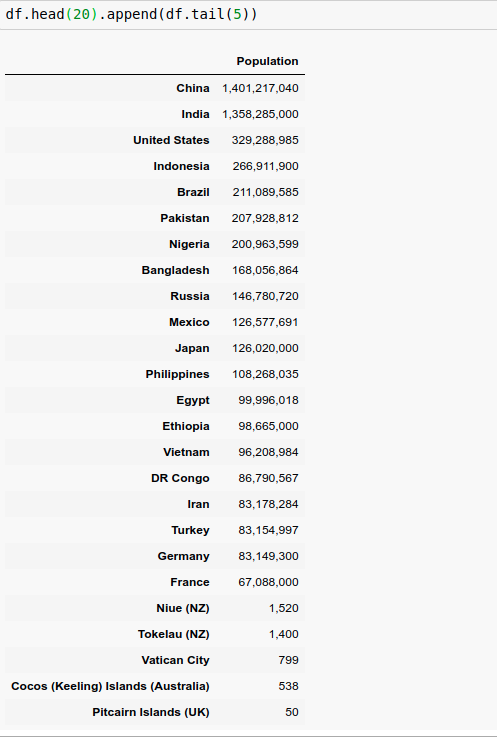 And we could easily plot using matplotlib the distribution of the population over all values using a logarithmic scale: 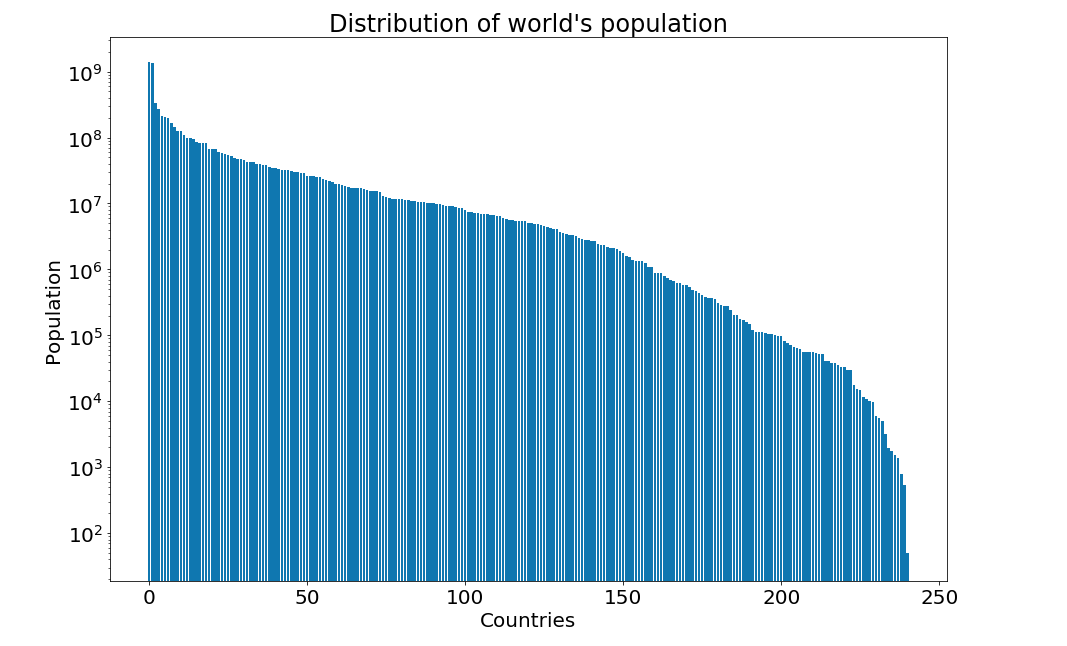 For a more comprehensive plot you could look at some statistics from here: 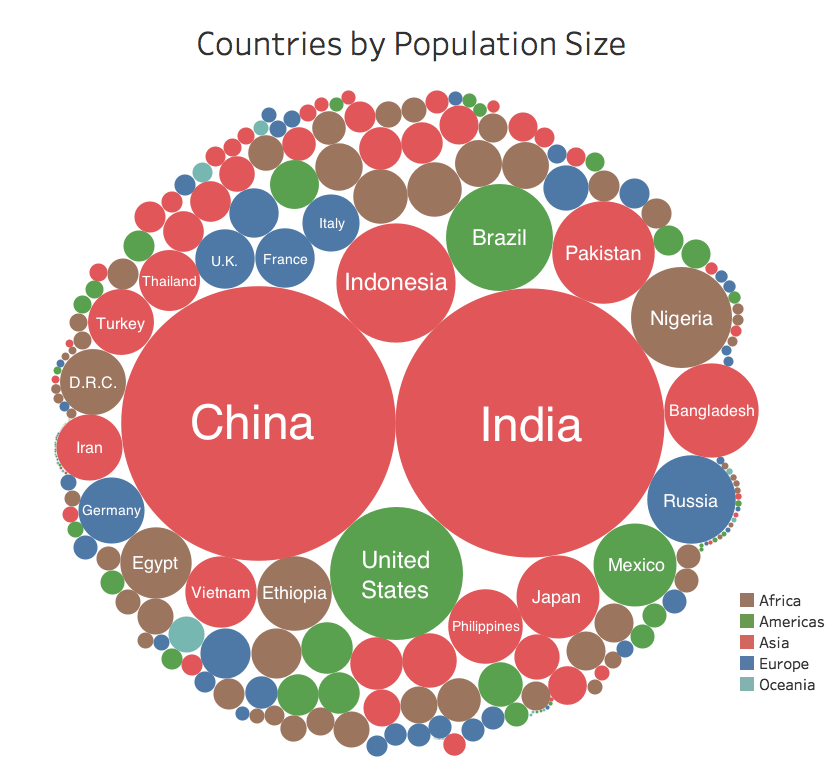 After getting a feeling of the distribution finding the world’s average country population is quite straightforward:

That is a huge difference! This might look absurd if you consider that only two countries, namely China and India, have a population exceeding half a billion. But if you consider the humanity as a whole the average person is most likely to live in one of these two countries. To be precise 36% of the world population is either living in China or in India! So the average person’s country population is around 600 million.

We can also infer it as a sampling problem. The “unbiased” sample is as seen by United Nations for example, with each country equally likely to be in the sample. Generating an unbiased sample of say 10,000 people is easy. We simply choose every country with equal probability:

If we plot the distribution of the unbiased samples we will notice that most samples have small population values.

To generate a biased sample as we did in Python before, we use the values themselves as weights and resample with replacement.

As you can see in the biased sample distribution a great proportion to the samples belong either to China or India the two most populous world countries. 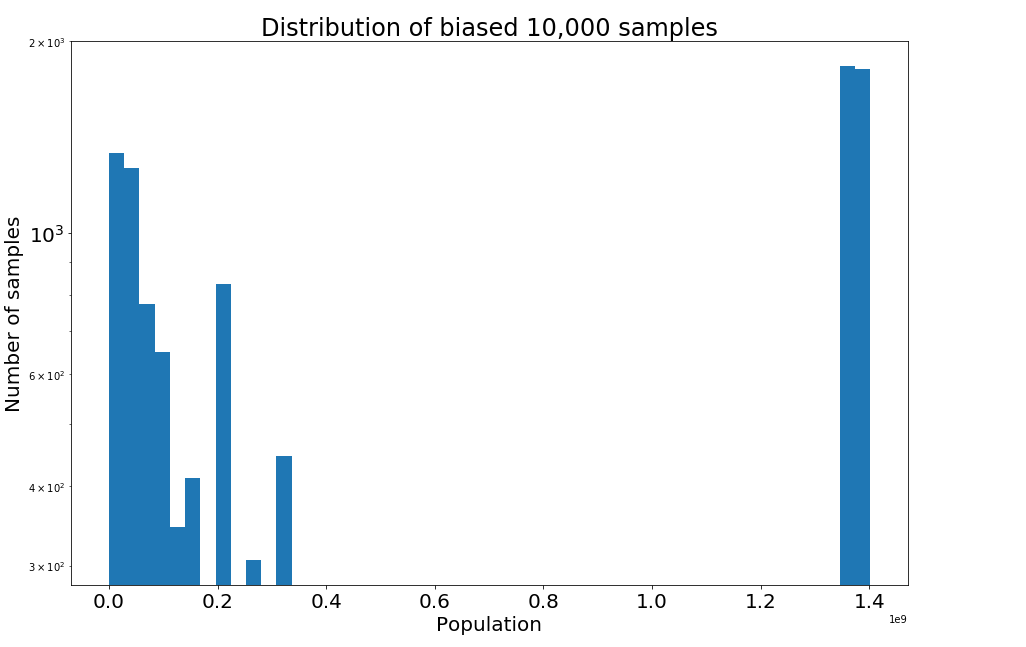 The same argument can be applied to the population of the cities. It will turn out that the average person is most likely living in an overpopulated, noisy, and polluted urban district than in a small, quiet, and idyllic village. The government in many countries may complain that the small countryside towns are left deserted, while at the same time the citizens might complain that they live in packed towns. They can both be right at the same time. Only a few lucky citizens can enjoy the extra space and clean air of the countryside. But when living in big cities a lot of people experience the problems associated with them.

The inspection paradox is a form of length biased sampling, where members of the population are sampled in proportion to size, length, duration, etc. Differences result in the perception of events based on whether we consider events from the point of view of the typical event or the typical person participating in an event.

In fact there are many more applications, where the inspection paradox comes into place:

What is more interesting is that the inspection paradox becomes more prominent in higher dimensions. For a multivariate normal distribution in high dimensions, nearly all the probability mass is concentrated in a thin shell some distance away from the origin. This is also related to the Simpson’s paradox, in which a trend appears in several different groups of data but disappears or reverses when these groups are combined. For example suppose you want to design a one size-fits all glove. By combining different measures of different people’s hand attributes and averaging over all of them, you might end up with the glove that fits nobody well. See for example a very simple case in two dimensions. Suppose you have the following individuals measured height and weight:

If we wanted to compute the average person’s height and weight and use them to design some clothes this would be 174.5 cm and 83.5 kgs. But this not only it wouldn’t fit any person from the list, but it would also be very inaccurate even for the persons who are close to these numbers. A person who would be closest to 83.5 kgs would be either 2 meters or 1.9 meters tall instead of 1.745 meters tall, while a person who would be closest to 1.745 meters tall would weigh either 60kgs or 100kgs instead of 83.5kgs.

Benefits of the Inspection Paradox: Companies only recently start to realize that calculating the average on their side does not say much about customer satisfaction. So using the implications of this paradox they can design more customer friendly experiences. There is a huge potential also in epidemiology. Flu outbreaks can be detected almost 2 weeks before traditional surveillance measures can by using the friendship paradox in monitoring the infection in a social network by analyzing the health of central friends. This study may be unique in demonstrating that social position affects one’s risk of acquiring disease. See here for more info..

Looking forward to hearing any of your encounters with the inspection paradox in the comments!

A great explanation by Allen Downey can be found here

The End of Average